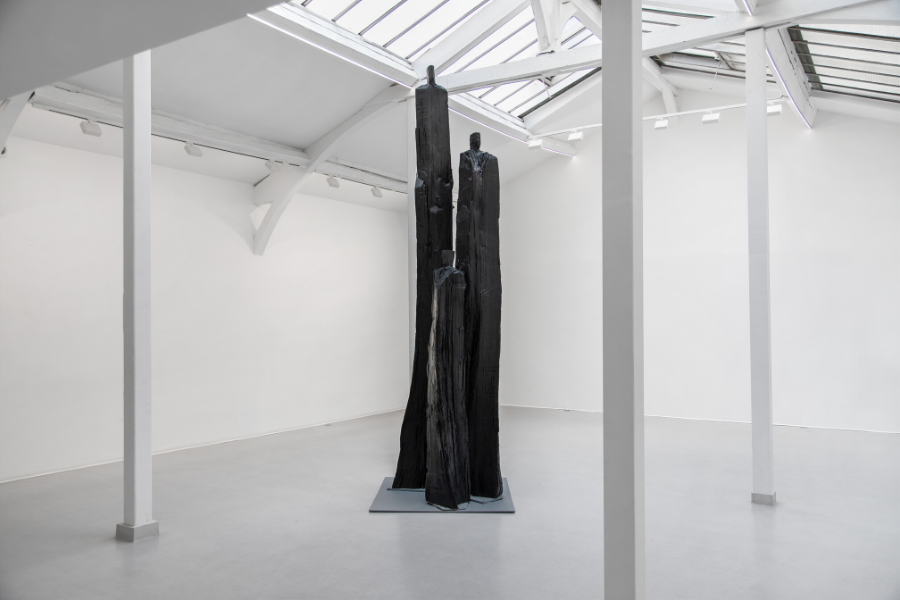 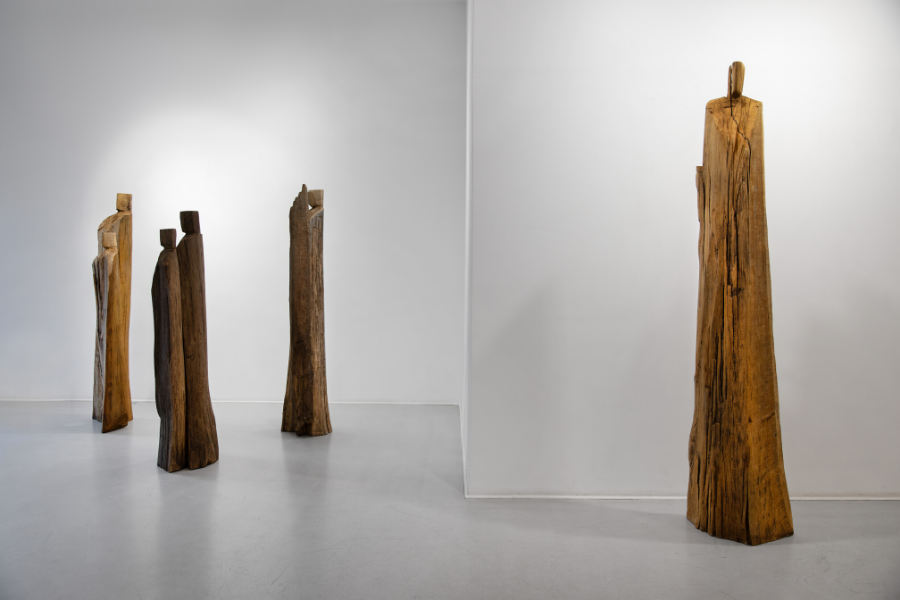 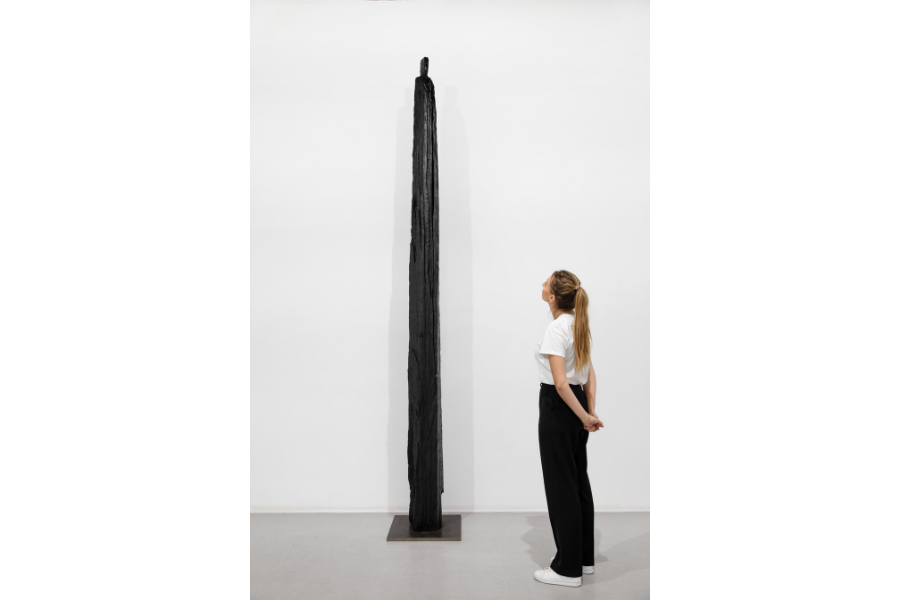 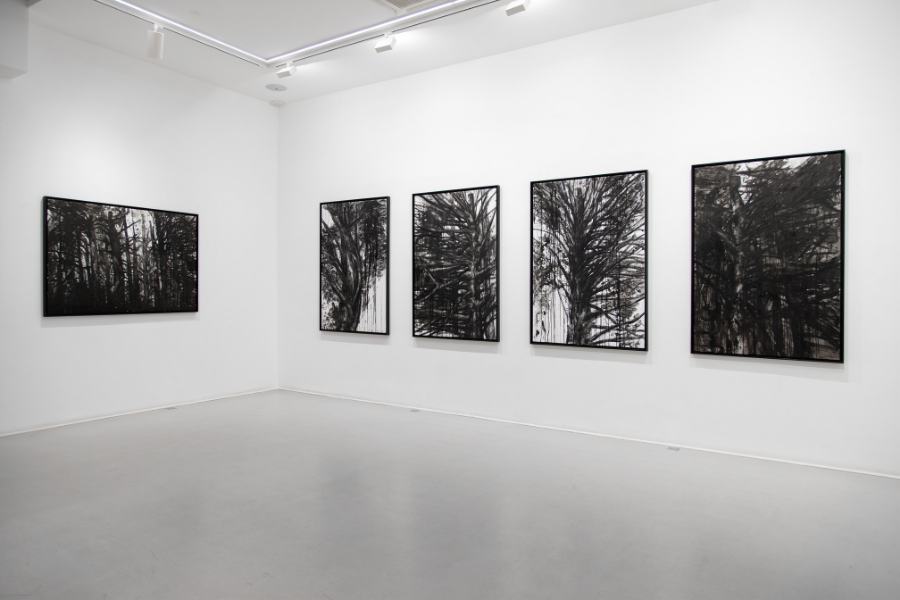 This is Christian Lapie's second solo exhibition at Galerie RX Paris, bringing together 9 sculptures in oak wood, all created in 2021. His work had already been presented at the invitation of Chantal Colleu-Dumond (director of the Domaine de Chaumont-sur-Loire) as part of the 4+4 format, appearing retrospectively as a preview of his 2020 exhibition: The Darkness of Origins.

L'ombre haute, Au bout de l'invisible, Regarder l'espace, Le signe fondateur, L'épaisseur du ciel, La matière du Monde, L'obscur miroir... Christian Lapie pays particular attention to the titles of his works. "I want them to be like a Japanese haiku, like a poetic clue to an imaginary world, the work must be like a poem.

But the titles also reflect a preoccupation that seems to loop in Christian Lapie's mind, a question that is never resolved, as shown in his latest exhibition entitled L'obscurité des origines: the question of the Beyond. By placing himself outside of human time, by proposing an artistic language that tends towards universality, the artist joins the quest for transcendence and spirituality that human beings have carried since the first decorated caves. This is where the need for "Man to mark his time and his relationship to the cosmos in a spiritual way seems obvious to me" comes into play. And to extend the reflection with the words of Paul Klee: "Art unknowingly plays with the ultimate realities, and yet reaches them. In the game of art we imitate the forces that have created and are creating the world.

"For my exhibition at the RX gallery, I would like people to be able to say 'there is something sacred in these works' and as Régis Debray wrote: you cannot escape the sacred, if you turn your back on it, it will make the worst trouble for you. The sacred overflows the religious, just as transcendence overflows the supernatural.

If everyone can see totems, guardians, warriors, ancient heroes, they are "figures" for Christian Lapie, upright shadows that invite us to raise our minds and souls, both symbolically and humanly.

Christian Lapie has deliberately chosen to present few works for a very simple and sober exhibition, favouring the sculptures as much as the spaces that surround them. This is a real spatial writing, alternating what could be charcoal pencil strokes and voids to play a visual score. Then, time is as if suspended, held in a climax that invites us to contemplate. The rhythm between these silences and these woods is given by the spatial arrangement of these works which are never presented in a frontal way, Christian Lapie preferring the emergence or the surprise.

Although the artist is famous for his monumental sculptures, which can reach heights of 7 metres, those he has designed for the gallery are of a more reasonable size: one rather large one will be placed under the glass roof and around it, 6 others (between 1.70 and 2.50 metres). "Sometimes they are groups of several figures from the same tree that has been split into several pieces. I am very attached to this idea of the founding unity from which the multiple is born.

Christian Lapie was born in 1955 in Val-de-Vesle in Champagne-Ardenne, on the family farm where he has lived since 1979, after studying at the École nationale supérieure des Beaux-arts in Paris. A painter at first, mixing all kinds of materials, he found his true artistic language after a seminal experience: in 1992, when he was invited to take part in a group exhibition at the Museum of Modern Art in Rio as part of the "Earth Summit", he realised that his ironic and political discourse was aimed at a Western-centric contemporary art world. He then wanted to create a work of art that would appeal to everyone, regardless of culture or country, "that everyone could make their own and for which neither the origin nor the era could be given, that it would be a universal symbolic sign", as he put it.

Since then, he has installed his large "figures" on every continent, from India to Canada, via Japan, Cameroon, France... and most recently in Menorca, thus weaving an international network from which these protective and benevolent effigies radiate.