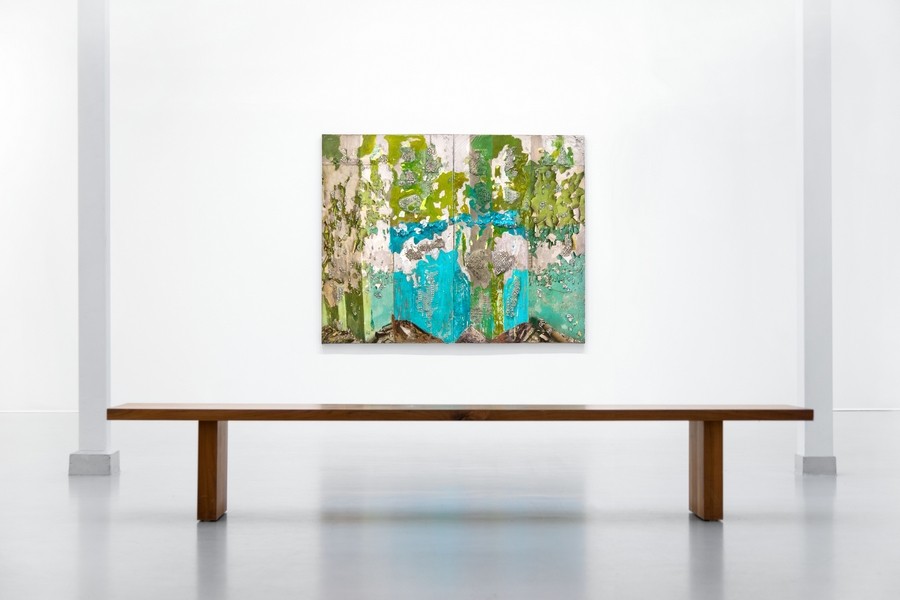 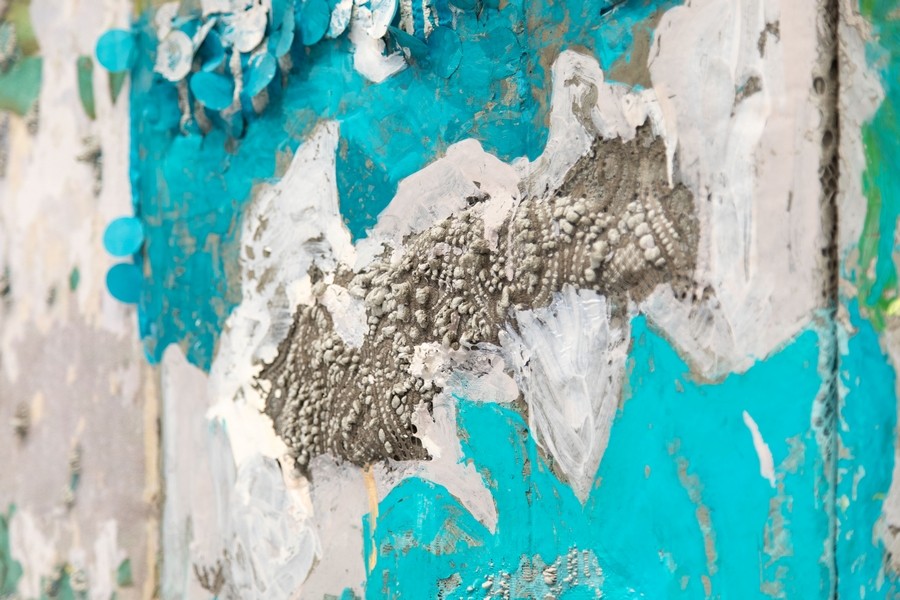 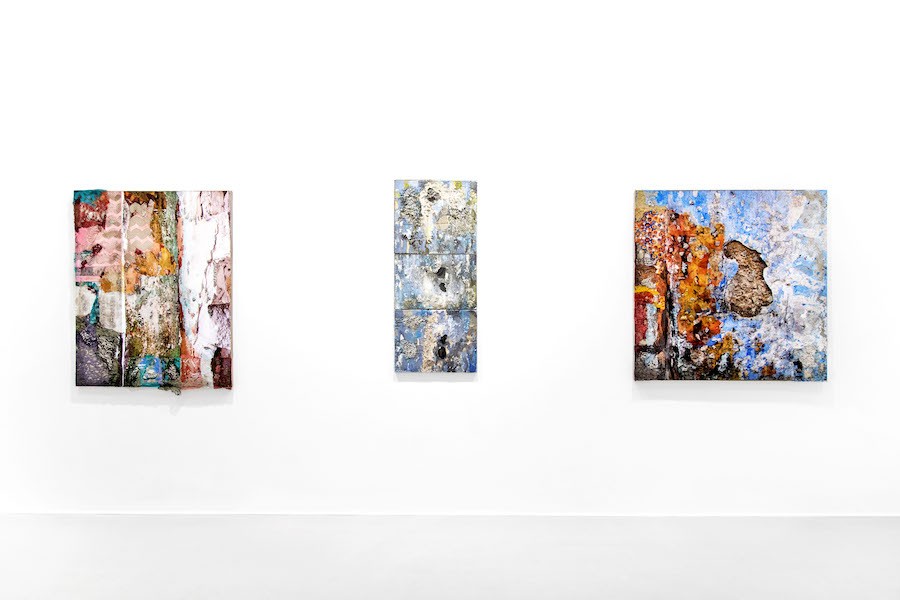 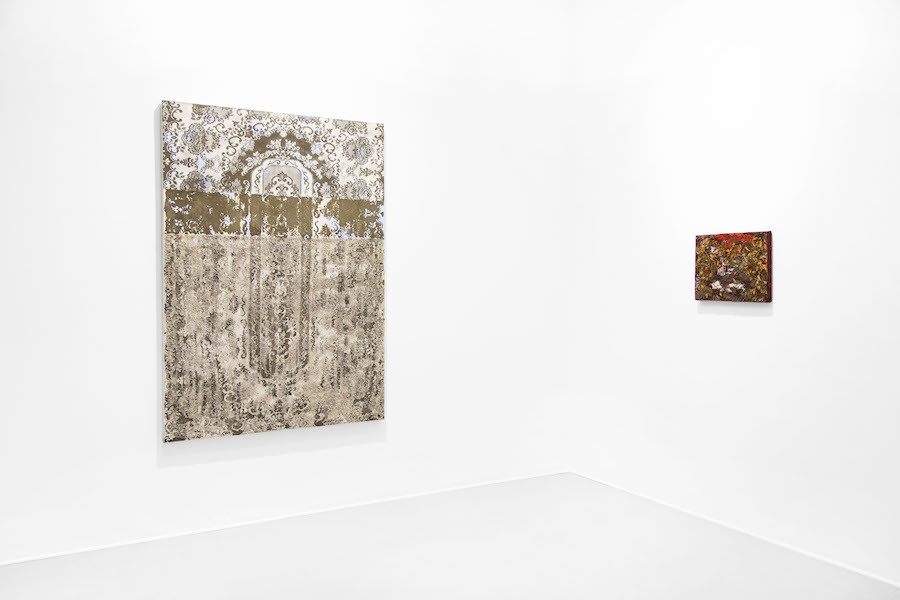 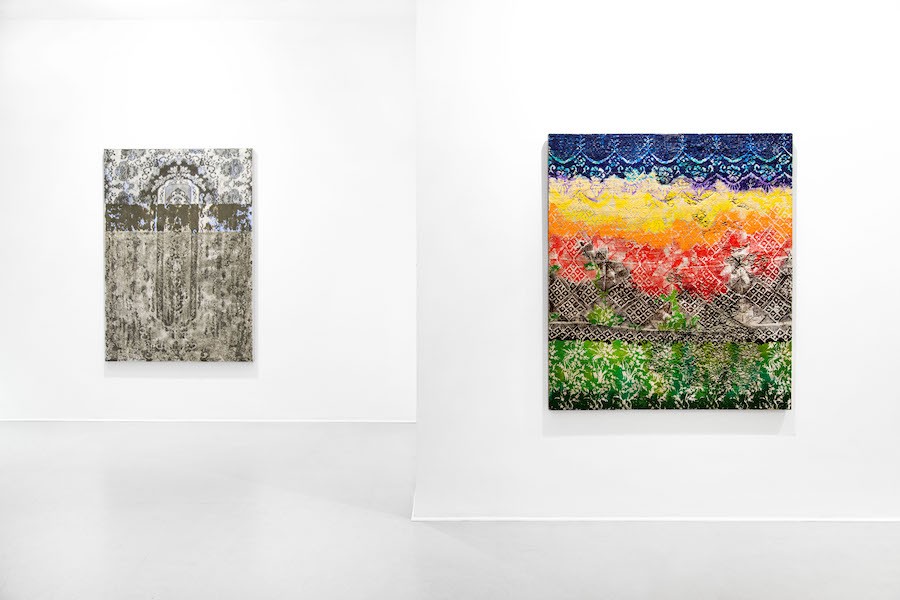 In Naomi Safran-Hon’s first exhibition at the RX Gallery, entitled “Soft Power”, the Israeli artist gives an insight into her work, in which she blurs the boundaries between reality and illusion, between the real object and its image. To do so, she condenses on the canvas a process of oppositions between materials and techniques: concrete and lace, painting and photography, barbed wire and fabrics. The materiality of the work and the different textures almost make her canvases tip over into sculpture. When you get a little closer, you understand that the artist is taking an intimate look at her native Haifa, through the questions of domesticity and home, war and exile, memory and history. As she summarizes, ”This is a group of paintings that deal with our relationship to the environment, both to nature and the built landscape, but also about how our lives are affected by external events.”

At first, there is fascination. Looking at Naomi Safran-Hon's works, the eye sweeps across the surface to focus alternately on the materials, the landscapes and the overall composition. The materials act first for various reasons: through the contrast between the rough and coarse aspect of concrete versus the delicacy of lace, but also through the illusionistic interaction between the concrete walls reproduced in the photographs - which the artist integrates into the canvas - and the concrete itself that she adds. She spreads it in an irregular way on the surface or makes it pass through the canvas through the holes she has drilled. These clusters create stalactites, like extensions of the subject of the photograph in real space. Everything becomes intertwined, we move from one dimension to another, as if we were crossing the layers of history.

Magnified ruined landscapes
And then we get to the core of the subject. At the center of Naomi Safran-Hon's canvas are her photographs of landscapes dominated by ruins. There, the artist's story and that of the city where she grew up, Haifa, are superposed. She regularly walks there when she returns - she lives in New York - and, camera in hand, she retains certain images of these abandoned buildings, in ruins. We follow her in a very specific neighborhood, Wadi Salib, out of time. As she explains: "It was the Palestinian part of the city and in 1948, the inhabitants were expelled or fled because of the threat of an imminent war. They were never allowed to return and their descendants still live in refugee camps. New Jewish immigrants were housed there until 1959, when a new wave of civil unrest occurred and the neighborhood was finally abandoned." This is certainly why she banishes all human presence in her photographs, only the traces remain, and not just any traces since she retains a ravaged environment for which one feels, in hollow, a certain suffering, a feeling of sadness and injustice.

"My paintings are like seeds..."
If the war and the Israeli-Palestinian conflict point in the background, there is no question for the artist to take a stand. To the question, "Is your art committed?", she answers very clearly: "Yes, but only committed to me. But I think you want to know something else. I think you want to ask me if I see my work as carrying an ideology or a political opinion. I don't think that's the role or purpose of art, and I know that the history of art is full of counterexamples. When we meet, we can have a great political debate and I will of course try to convince you that my opinion is the right point of view, but in my work, I don't try to do that. I hope that the work challenges the visitors in a deeper way. If a person's ideology is like a metal house, trying to convince them is like hammering on an immovable structure; it will only make noise. If we plant seeds of thought inside, a tree might grow and go through the house from the inside, replacing the established ideologies with a new way of thinking. My paintings are like those seeds, opening a process of epistemological transformation."

Although this is Naomi Safran-Hon's first exhibition at RX Paris, the French public has already been able to see the Israeli artist's work in March at Les Franciscaines in Deauville, in June at the Bonisson Art Center in Rognes and in November at the gallery's booth at Asia Now.

Naomi Safran-Hon (1984) was born in Oxford, England and raised in Haifa, Israel. She lives and works in New York City. Safran-Hon attended the Skowhegan School of Painting and Sculpture in 2012, participated in the Art OMI Residency (New York) in 2016 where she received the Francis Greenburger Award and in 2019-2020 from the LMCC Residency. In 2020, she was the recipient of the Colene Brown Art Prize. Safran-Hon's work combines photographs of architecture and landscapes she makes, which she mixes with cement and lace, barbed wire transforming these images into mixed media paintings. Her work explores the concepts of home, domesticity and war. Saffron Hon has exhibited extensively in the United States and internationally. His work has been exhibited in venues such as Marfa Contemporary, TX; Haifa Museum of Art; Brooklyn Museum, NY; Queens Museum, NY; Islip Museum, NY; Museum of Contemporary Art Herzliya, Museum Africa, Johannesburg. In her last solo show at Slag Gallery (Chelsea) in 2020, she was recognized by The New York Times.