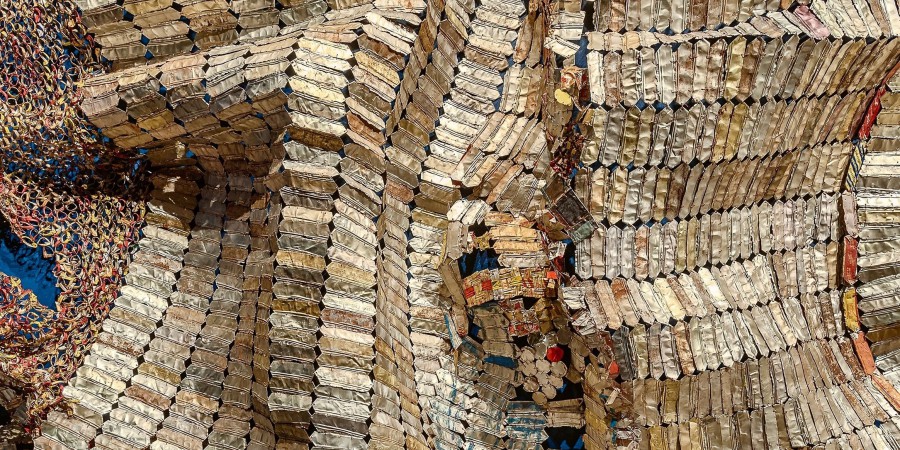 With "El Anatsui: Triumphant Scale", Haus der Kunst the most comprehensive and detailed presentation of El Anatsui's oeuvre thus far. Occupying the entire East Wing, the exhibition comprises key works from five decades of the artist's career. At the core of the exhibition, which focuses on the triumphant and monumental nature of El Anatsui's groundbreaking oeuvre, are the bottle-cap works from the last two decades, with their majestic, imposing presence and dazzling colors. The exhibition also presents the lesser known wood sculptures and wall reliefs from the mid-1980s to the late 1990s, ceramic sculptures from the 1970s, as well as drawings, prints, and sketchbooks. Fascinated by the museum’s monumental architecture, El Anatsui has created three works especially for this exhibition, among them the installation "Second Wave" on the building’s façade.

The exhibition reveals the artist's tireless preoccupation with the question of how a contemporary sculptural concept can be developed from the rich plastic innovations of classical and traditional African art. El Anatsui has persistently worked to transform the formal and sculptural possibilities of African sculptural idioms and, over fifty years, he has repeatedly revised and reinvented his material and compositional techniques to astonishing effect – from the early smaller wooden reliefs with their incised markings and broken ceramic forms, to the monumental outdoor cement sculptures, and, more recently, the vast and spectacular metal wall and floor works, which blur the boundaries between sculpture, painting and assemblage. In El Anatsui's hands, light, form, color, porousness and corporeality merge into awe-inspiring and triumphant works of art.

El Anatsui generates meaning out of his material and technical process. For example, the bottle caps come from hard liquors introduced by Europeans, as currency – and thus a means of subjugation – during the era of transatlantic slavery and colonialisation. The process of cutting, flattening, squeezing, twisting, folding and joining of thousands of these bottle caps, together with copper wire that weave together fabricated sections into a single work, speaks to the making of human communities out of connected individual subjectivities.

The exhibition is made possible thanks to major funding by the Art Mentor Foundation Lucerne. We further acknowledge the significant support of an anonymous donor; and the generous contributions of Gesellschaft der Freunde Haus der Kunst e.V., Jack Shainman Gallery, New York, Kavita Chellaram, Reni Folawiyo, Bolaji Balogun, and Yvonne Fasinro. The catalogue is published by Prestel.

Curated by Okwui Enwezor, former director of Haus der Kunst, and Chika Okeke-Agulu, Professor at the department of Archaeology and Art History at the University of Princeton, Assistant Damian Lentini, Curator at Haus der Kunst