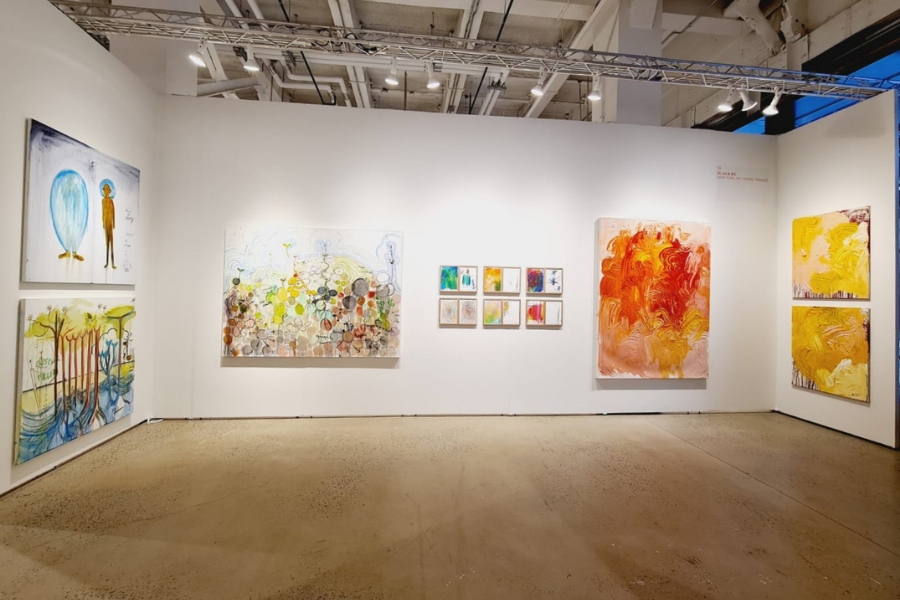 As a manifesto of the “childish innocence of art”, his "scribbles", as Nitsch calls them, can sometimes evoke seismic surveys, sometimes the candour of a child who seeks to leave his traces. At the frontier of deliberately primitive gestures, these works convey the hatching of a destruction and creation process.

One of the founding members of the Viennese Actionism art movement, Hermann Nitsch, born in Vienna in 1938, is also one of the most prolific members of the group. He is particularly interested in expressionism and religious art, following his academic training. Noted as a master of Austrian performance, the continuously active artist presents a total art with sensuality: limitless, Dionysian and demonic. His mastery of many expresses his system of values, at once spiritual, philosophic, aesthetic, and social, all taking part in his larger artwork.

The activity and artistic thought of Fabrice Hyber, who defines himself as a quantum artist, are constantly crossed by the notions of mutation and transformation. Scientific training before entering the Ecole des Beaux-Arts in Nantes, the artist designs his work in the form of a gigantic rhizome that develops on a principle of echoes. Invariably starting from the practice of drawing and painting, he invests all modes of expression and constantly disseminates his work from one medium to another: "No matter the materiality of the work, only its ability to trigger behaviors."
The living and nature are explored at will by the artist who has made green his favorite color: "My green obviously refers to nature and ecology, but it is not that of ecologists who tramples on often more than they advance which is the opposite of everything that leads me." Intermediate states, mutants, hybrids Hyber surrounds himself with new heroes and gives birth to a multitude of animal plants, running trees, or sponge men/women.

Fabrice Hyber's work embraces a movement, natural and endless, capable of giving birth to reality and new energy from an association of people, of ideas carried by an unrestrained imagination. Inventor of poetic metamorphoses, anticipating future mutations, the artist cultivates the art of mixing, shifts limits, opens up possibilities